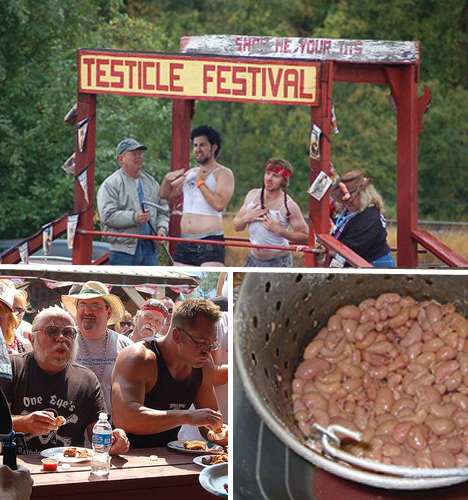 People who live in Montana tend to have a “waste not, want not” philosophy. So, why would they throw testicles away and give up all of that delicious, boneless protein? At least 15,000 people share that outlook, heading to the Rock Creek Lodge outside of Clinton every year to “have a ball at the Testicle Festival”. Bull testicles, also known as Rocky Mountain Oysters, are peeled, marinated in beer, breaded and deep-fried.

A few states away in Illinois, there’s a somewhat smaller, but no less strange annual homage to genitals: the Turkey Testicle Festival. 1200 pounds of deep-fried turkey balls sell out completely every year. One brave culinary explorer claims “they look like little popcorn shrimp, and they taste like chicken.”

2 Replies to “why throw testicles away and give up all of that delicious, boneless protein?”