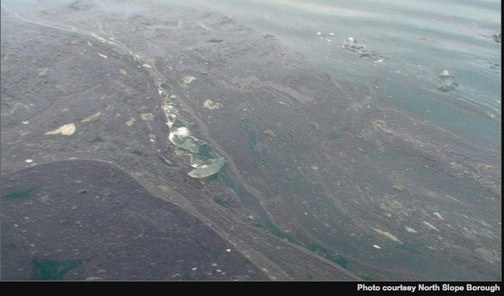 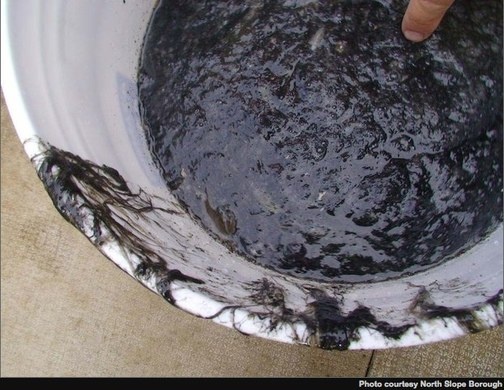 Japanese researchers monitoring the activity of giant jellyfish in Chinese waters are warning of a potentially historic and catastrophic invasion this year.

Marine surveys conducted in late June have revealed alarming numbers of Nomura’s jellyfish — massive creatures that grow up to 2 meters (6 ft 7 in) in diameter and weigh as much as to 220 kilograms (about 450 lbs) — lurking in the Yellow Sea and East China Sea. The researchers warn that ocean currents may bring swarms of the monster jellies to Japan,which has been plagued by similar invasions in recent years. 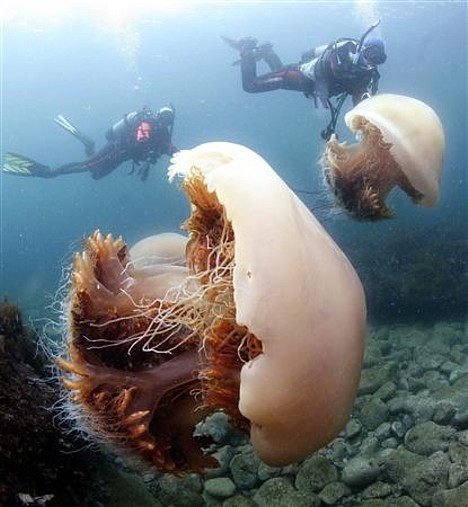 Based on what they have seen so far, the researchers warn this year’s onslaught of Nomura’s jellyfish (Nemopilema nomurai, or Echizen kurage in Japanese) could deliver a massive blow to Japan’s fishing industry, rivaling even the devastating 2005 deluge that caused tens of billions of yen (hundreds of millions of dollars) in damage nationwide.

The surveys are being conducted by a team led by Shinichi Ue, a professor of biological oceanography at Hiroshima University who also chairs a government research committee tasked with developing technology to predict and control jellyfish explosions. Ue has been monitoring the population density of Nomura’s jellyfish in the southern Yellow Sea and northern East China Sea since 2006. 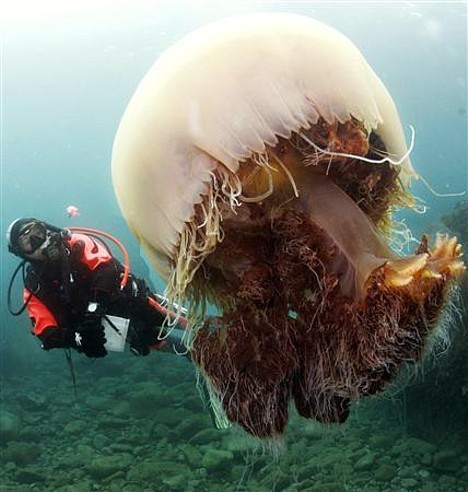 To make matters worse, this year’s swarms appear to be taking a more direct and southerly route to Japan, unlike in 2007 when the jellyfish appeared to take a more northerly route, approaching the Sea of Japan coast from the direction of Korea. According to the researchers, the ocean currents could bring unprecedented numbers of Nomura’s jellyfish to Japan’s Pacific coast, which typically sees far fewer of the monster blobs than the Sea of Japan coast.

Nomura’s jellyfish typically bloom in Chinese waters in spring, and they mature into adults as ocean currents slowly carry them north. By July, when the first swarms reach Tsushima (just north of the southern island of Kyushu), many jellyfish are as large as sumo wrestlers. At this size, it only takes about 5 or 10 of them to destroy a commercial fishing net.

In addition to damaging nets, the giant jellyfish are blamed for killing other fish with their venom, lowering the quality and quantity of catches, increasing the risk of capsizing trawlers, and stinging fishermen.

In 2005, the fishing industry reported over 100,000 cases of jellyfish-related damage nationwide. At the peak of the invasion that year, an estimated 300 to 500 million monster jellyfish passed through the Tsushima Strait into the Sea of Japan each day.