What is the Great Pacific Ocean Garbage Patch? 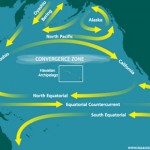 As authorities continued their search and recovery mission last week following the deadly crash of Air France flight 447, they thought they had finally begun finding pieces of wreckage from the jet. Various objects floating in the Atlantic Ocean near the crash site were examined closely for any evidence of what happened, until investigators suddenly realized what they were looking at. It wasn’t part of the plane; it was just plain old ocean trash.

via What is the Great Pacific Ocean Garbage Patch? | MNN – Mother Nature Network.