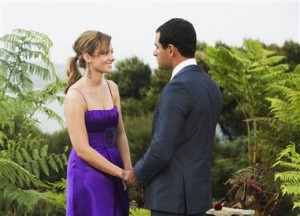 Pineappleope.com TV reporters are covering what turned out to be one of the greatest stories of our time, The Bachelor of this season. There have been many break-ups. But until Monday night, none of the couples broke up while the show was actually airing.

Jason Mesnick, the single dad who got with and most likely got laid and whose heart was broken by DeAnna Pappas at the end of “The Bachelorette 4,” broke two hearts and a possible 3rd, not counting viewers who are dismayed by the way he chose Melissa only to dump her during the “After the Final Rose” special and pick Molly, who he’d rejected earlier.

If this sounds at all confusing to you, it is because it is. During the audience-less reunion, he told her, “We’re not right for each other.” She said, “I don’t believe you. I thought things were perfect,” but she should’ve believed him. And then she started to talk about herself in the third person, which is never a good sign…. END_OF_DOCUMENT_TOKEN_TO_BE_REPLACED