Jon Gosselin has a new career in store for himself, a designer. Gosselin, from TLC’s “Jon & Kate Plus 8,” took a meeting with Christian Audigier of the Ed Hardy brand in Paris, France, on Saturday.

According to a source close to the designer, Audigier flew out the divorcing dad of eight for the meeting.

Audigier is interested in having Gosselin design a Bluetooth cell phone headset as he is aware Gosselin is a fan of the Ed Hardy brand, a source told Access Hollywood.

In fact, Gosselin has been spotted regularly in recent months in Ed Hardy clothing.

As fans of “Jon & Kate Plus 8” know, Gosselin quit his job to stay at home and take care of his children — sextuplets and a set of twins. 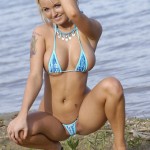 Gosselin’s visit to Paris has already made headlines as he was captured by the paparazzi holding hands with a young woman, while strolling in the city.

According to Radar Online, Jon was holding hands with a woman identified as Hailey Glassman, the daughter of the doctor who performed a tummy tuck procedure on Jon’s wife, Kate Gosselin.

The Web site claims Jon Gosselin and the young woman, who is said to be slightly older than college age, have been dating for months.

Jon and Kate Gosselin confirmed they are divorcing in June. On the June 22 episode of “Jon & Kate Plus 8,” Jon Gosselin said he was looking forward to his future.

“I’m physically and emotionally hurt by all of this, I’m super excited and really hurt at the same time because I have a new chapter in my life,” he told the TLC cameras at the time. “I’m only 32 years old and I really don’t care or know what’s going to happen,”

Stay Tuned as this story unravels