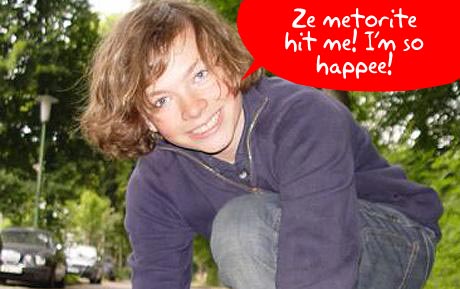 This 14-year-old boy is Gerrit Blank, and he is probably smiling because he survived a 30,000 mph meteorite hit. His tale—confirmed by scientists at Germany’s Walter Hohmann Observatory—seems like the genesis of a superhero:

At first I just saw a large ball of light, and then I suddenly felt a pain in my hand. Then a split second after that there was an enormous bang like a crash of thunder. The noise that came after the flash of light was so loud that my ears were ringing for hours afterwards. When it hit me it knocked me flying and then was still going fast enough to bury itself into the road.