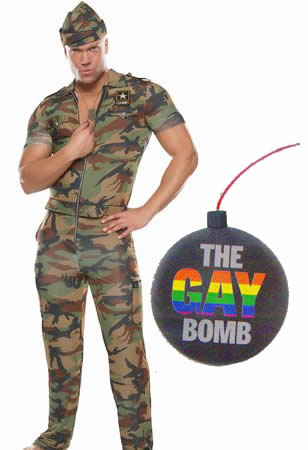 “Gay bomb” is an informal name for a theoretical non-lethal chemical weapon, which a United States Air Force research laboratory speculated about producing.

In 1994 the Wright Laboratory in Ohio produced a three-page proposal of a variety of possible nonlethal chemical weapons, which was later obtained—complete with marginal jottings and typos—by the Sunshine Project through a Freedom of Information Act request. In one sentence of the document it was suggested that a strong aphrodisiac could be dropped on enemy troops, ideally one which would also cause “homosexual behavior”. The aphrodisiac weapon was described as “distasteful but completely non-lethal”. In its “New Discoveries Needed” section, the document implicitly acknowledges that no such chemicals are actually known.