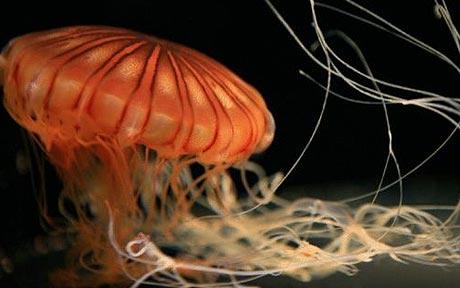 Fishermen in northern Japan are braced for a “massive” inundation of huge Nomura’s jellyfish this autumn. One of the largest, most obese jellyfish in the world, the species can grow up to 2 meters in diameter and weigh 200 kg. The last time the phenomenon occured on a similar scale was in the summer of 2005 when the jellyfish swarmed into bars, got drunk – then went back out and damaged nets, rendered fish inedible with toxic stings and injured fishermen.

The first jellyfish have been reported off the coasts of Shimane, Kyoto and Niigata prefectures. Local bars and restaurants are gearing up for the attack – with buckets of salt and locked doors to keep the drunken bastard jellyfish out.

via Massive wave of jellyfish to attack Japan – Telegraph.