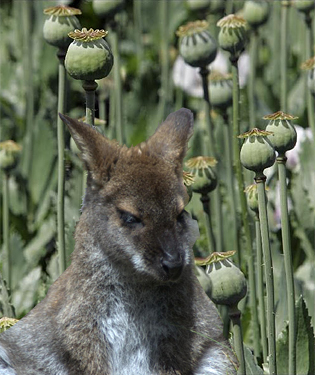 WALLABIES are hopping into Tasmania’s opium poppy fields and getting high.

The revelation has also solved what some growers say has spurred a campfire legend about mysterious crop circles which appear in the state’s poppy paddocks. In true X-Files style, Attorney-General Lara Giddings said yesterday the drugged-up wallabies had been found hopping around in circles squashing the poppies, creating the formations.

The wallabies are increasingly entering the fields and eating the poppy heads.

That causes them to get high and run around in turns creating “crop circles”.

“The one interesting bit that I found recently in one of my briefs on the poppy industry was that we have a problem with wallabies entering poppy fields, getting as high as a kite and going around in circles,” Ms Giddings told a Budget Estimates hearing.

“Then they crash.  We see crop circles in the poppy industry from wallabies that are high.”

Tasmanian Alkaloids field operations manager Rick Rockliff said wildlife and livestock which ate the poppies were known to “act weird” — including deer in the state’s highlands and sheep.

“There have been many stories about sheep that have eaten some of the poppies after harvesting and they all walk around in circles,” Mr Rockliff said.

“But as growers we try our best to try and stop this sort of consumption, particularly by livestock,  due to concerns about the contamination of the meat.

“There is also the risk to our poppy stocks, so growers take this very seriously but there has been a steady increase in the number of wild animals and that is where we are having difficulty keeping them off our land.”

Tasmania is the world’s largest producer of legally grown opium for the pharmaceutical market.  About 500 farmers grow the crop supplying the market with about 50 percent of the world’s raw material for morphine and related opiates.

Ms Giddings was answering questions about the security of Tasmanias poppy stocks, that are considered some of the safest in the world.

However there has been 17 thefts resulting in 2280 poppy heads stolen throughout the financial year.

Of those, Ms Giddings said 551 heads, eight events were from thebaine crops.

Thebaine is a variety of poppy opiate alkaloid is can be potentially deadly when it is consumed.

The other main variety is morphine.

Mr Rockliff said those figures were still considered very low but called for a review into the state’s security protocols.

“Although there has not been a major incident in the past 40 years of this industry it is time that we look at licensing measures and other security handling procedures to make sure that stays the same in the future.”

via Tassie wallabies hopping high Weird News – The Mercury – The Voice of Tasmania.