The Pamplona city hall has cut its budget for the festival by more than 10 percent, to euro2.5 million ($3.5 million). The majority of these cuts were health services, police, festival staff and party favors. It is widely expected these budget cuts will raise the 2009 bull running death toll dramatically. 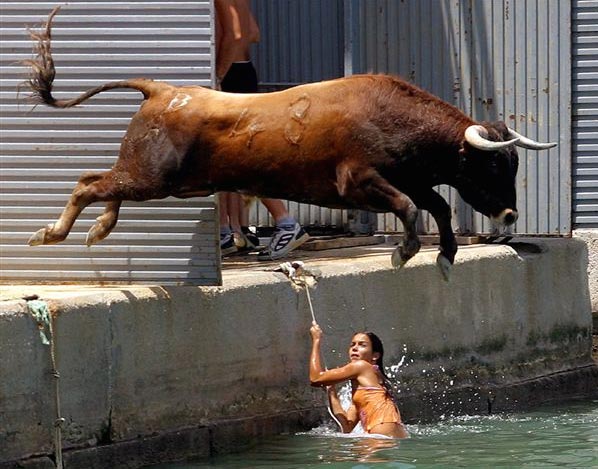 Daredevils sprinting with one-ton fighting bulls swallow an exhilarating cocktail of adrenalin and fear. Now, a new brand of jitters has set in at one of the world’s great fiestas as businesses ponder the partypooping impact of economic woe.
Don’t bother asking the tens of thousands of revelers who kicked off Pamplona’s running of the bulls Monday with a traditional rocket-firing ceremony outside town hall. They’re too busy drinking beer or wine or cleaning off the flour, eggs or ketchup they hurled at each other to get the eight-day San Fermin festival off to a merry and messy start.

Adds 20-year-old Theo Franzen of Sweden: “It is nice, but kind of scary.” 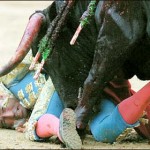 No, it is mainly merchants who are feeling the pinch of the world’s economic downturn. Rates on hotel rooms are down because of slacker demand, big-spending American and other foreign visitors are harder to find, and bars that usually make a killing off hordes of thirsty patrons from around the globe expect to serve up less booze.

The leaner times are visible elsewhere, too. The Pamplona city hall has cut its budget for the festival by more than 10 percent, to euro2.5 million ($3.5 million). And two Spanish TV networks that had been bickering over rights to broadcast the morning bull runs have agreed to do it jointly to save on costs…. FULL STORY via AP