It is widely expected Apple will blow minds with its iPhone 4.0 update announcement tomorrow. With Apple’s event just over 24 hours away, we knew it would be a good idea to recap the most likely true OS 4.0 rumors. The big event starts tomorrow morning at 10AM PDT. What we’ve got here is the most official assembled list of iPhone OS 4.0 rumors… 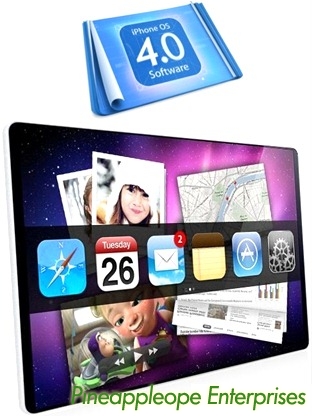 3D Support – With 3D movies going big time these days, Apple plans on patching the iPhone to allow users to experience 3D on their handset while wearing stereoscopic glasses.

Multitasking – The second most persistent rumor is multitasking for applications. As it stands the iPhone OS is not the best at multi-tasking, and users are mad as hell. Newest rumors have the new OS having an Exposé-like feature which would make the iPhone easy to use and a multi-tasker.

4 Way Phone Calls – Easily one of the most demanded features, the ability to talk to three others at the same time. Great for business meetings and for calling Quest.

One Email Box – Users have been clamoring for a global inbox which could hold a mash-up of all email. This update would make for significantly better emailing on the iPhone. But does this mean you’d get the same newsletters twice in the same inbox?

OS Themes – Plan on personalizing your phone to be as unique as you think you are. New themeing capabilitys are a shoe-in for this OS update.

New iPad Features – Expect to see a lot of, if not all, iPad features included in this OS update. Such as the ability to read a book or read a book and listen to music, at the same time.

Compass Upgrade (3GS only) – Rumor has it the compass feature will get an update… no one is sure what kind of update though.

Secret Easter Eggs – As with the last 3.0 update, when several easter eggs were included, you will most likely see more easter eggs.

…This list of rumors is growing. If you or a friend is a v3.0 iPhone user and would like to contribute to this list email: iphone@pineappleope.com