Recently, Vanessa Minnillo was caught with nothing on, but a bikini. For you all who are just meeting Vanessa for the first time, here is a little background: She is an American television personality, television host, model, actress, former Miss Teen USA, and she is mostly known for hosting Total Request Live on MTV (AKA TRL). 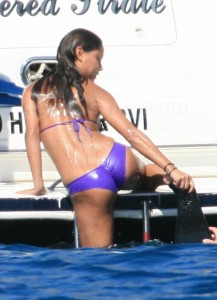 Minnillo was in a sporadic three-year relationship with New York Yankees dbag shortstop Derek Jeter from November 2003-2006. She is currently dating Nick Lachey after meeting and shooting in Lachey’s music video.