A TEENAGE girl attempting to sail solo around the world has had to turn back less than 24 hours into the voyage after running into a massively gigantic bulk cargo ship, potentially operated by pirates. 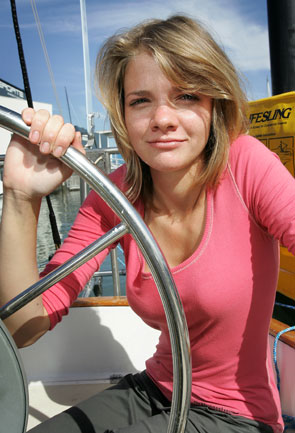 Jessica Watson – (in no way related to hot and hormonal Emma Watson, despite their obvious similarities)  at the sweet age of 16, set sail on Ella’s Pink Lady from Queensland’s Sunshine Coast yesterday morning after more than a year of sultry preparation – from before when she was 16.

The sexy Sunshine Coast schoolgirl was attempting become the youngest, hottest girl to sail solo, non-stop and unassisted around the world, all by herself. Despite the risk of pirates, this young lady went out to risk it ALL.

“The fcking huge cargo ship is believed to be heading north up the east coast and has allegedly attempting a got-hit and run,” said some spokesman. “The possibly pirate cargo captain was likely high on a veritable cocktail of pills, and potentially realized the girl’s young age would be nothing but trouble if they boarded that boat.”