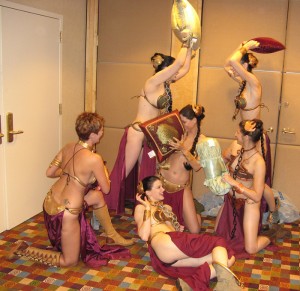 The father of a child star in the oscar winning movie “Slumdog Millionaire” tried to sell his 9-year-old woman (Rubina Ali) to a reporter posing as a wealthy sheik.

The transaction never went through. Rubina has evaded slavery once again. Slavery is still huge in India, which most people don’t know. Most Indian slaves serve as straight up slaves. Around 50% of slaves in India are required to dress like Princess Leia when she was a slave in the famous movie ‘Star Wars: the Final Frontier.’ The accompanying photo should give you an idea what this lifestyle is like.

Indian Cops are still questioning Rubina’s father. It is likely that he will come away with only a slap on the wrist due to the lax slavery laws in India