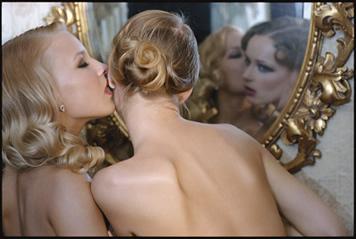 I don’t think I’m the only straight woman that has been single so long, I’ve considered switching teams. My first choice would be to turn my cat, David Litterman, into a human because he’s so sweet and cuddly. But given he’s neutered and now older than me (in cat years), I’ve been thinking about what is great about other women.

1. We could communicate, there’s no penis to interfere with our brain waves.

2. We could cuddle and be satisfied with close physical contact and no penetration.

3. Women have softer lips. Learned this in a body language acting workshop—women are fun to kiss, even French kiss. (Hey, it was integral to the acting scene.)

4. Women prefer to leave the bed to pass gas (at least straight women like me do) whereas men think it’s funny to fart in bed and gross out a partner.

5. Hugs can be sexual or non-sexual on a date. Maybe I’ve dated the wrong men, but most seem to want the hug to lead in the direction of the sack.

6. It’s nice to hold a woman’s hand since we usually don’t have sweaty palms. See #1 and #5 above, I think the penis and bedroom goal may lead to sweaty palms.

7. Women really kiss softly and tenderly. Some guys I’ve kissed seem to be trying to give me a tonsillectomy or conduct a dental exam. And those guys usually have more spit than the ocean has water. If I want a kiss that wet, I’ll kiss a dog!

I hope other women can add to this list (gay and straight). And I’m not trying to bash men here because I’m still looking for the right guy, I just need him to be more intuitive than many guys. Straight women love gay men because they have more feminine intuition (and certainly better fashion sense than me!)

via Seven Reasons Women Prefer Other Women (from the Straight Perspective) – DivineCaroline .