10:33 – Stakes are High today as warriors prepare for the ultimate 8 hour fantasy quest, PAO LARP Day 2010! Reigning champion McChill defends his title as he and his crew take on a handful of half-wit noobs and four experienced LARPers 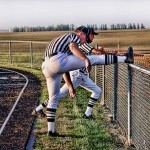 10:48 – McChills has put his team to work diggin trenches

10:51 – Looks like the officials are itching to start the battle

12:22 – So far no one has attacked yet. Bunch of hootin and hollerin going on. Name calling. McChill is trying to get team Sundassa to attack first.

12:40 – Continuing the standoff, McChills team Assilsa has not left the trenches

12:40 – Catwoman of team Sundassa throws down the first attack (super cat purr) of the match. The attack misses everyone due to invisible shield cast by McChill surrounding the trenches.

1:03 – Several members of team Sundassa are banging on the Assilsa invisible shield, with hopes of bringing it down

1:22 – The invisible shield has yet to be breached. McChill is passing out sandwiches in the trenches – It appears that team Assilsa has secret trick up their sleeves as they do not seem to be worried by the now 9 members of team Sundassa fighting the invisible shield.

1:52 – It looks as though Don of team Sundassa got his sword caught in the invisible wall, a minor gain for team Sundassa. Team Assilsa seems unphased by Don’s attack.

2:13 – Three hours into the match and Sundassa appears to be losing hope against the invisible wall. Assilsa

2:32 – Team Sundassa is calling in reinforcements to help out, including ’02 champion, Margarette Merwoman

2:48 – Merwoman is on the scene, slowely making her way to the seemingly impenetrable invisible shield, cast by McChill hours ago

2:59 – Team assilsa flees the trenches, seemingly shocked that the invisible wall had been totally breached. Merwoman moves gracefully after McChill

3:02 – McChill strikes down Merwoman in one quick attack, severing both of merwomans fins rendering her immobile.

3:05 – McChill performs a suplex on Merwoman, ending her life (in game only, of course)

3:17 – ‘Axe’ Stevens takes a run at McChill with one numbchuck, McChill easily downs him with a karate chop to the spot between the neck and shoulder

3:19 – McChill kicks Axe in the leg, effectively breaking the leg (in game). McChill hollers over to teamate and semi-life-partner Optimus to finishe Axe off.

3:39 – Optimus finally arrives at the scene, McChill keeps Axe at bay by placing his 14″ foot on his kneck, restricting air from reaching his lungs (a move usually looked down upon, but legal in competitive play)

4:01 – After carefully setting up, Optimus tears off Axe’s upper limbs with robot arms attack, and eats them. Axe is a goner.

4:04 – Axe drinks health potion, jumps up and catches Optimus off guard and bites him on the shoulder exaust pipe causing 0 damage to optimus. McChill shoots Axe in the face area with his double hand pistol. Killing Axe and taking him out of the match.

4:50 – Team Sundassa has retreated back to their camp to recuperate from their losses. Assilsa heads back to the trenches for power break and to deep fry some power golden onion rings to gain more power.

5:22 – Team assilsa looks to be having problems waking McChill, without their best player their situation just doesn’t. look. good.

5:40 – SilvaSurfer is lowering him and his hoverboard to the ground

5:55 – SilvaSurfer has touched down on the ground

5:56 – Robin and Shila tag-team SilvaSurfer, pushing him to the ground with the combined physical strength of their hands. SilvaSurfer falls backwards onto his back, crushing his silva armor.

6:01 – SilvaSurfer is showing no signs of movement. The officials blow the whistle pausing competitive play.

6:03 – Officials make it to SilvaSurfer in a timely fashion, but SilvaSurfer is still knocked out, but breathing, but taking still taking damage from Robin and Shilas tag-team move.

6:07 – SilvaSurfer is removed from the battlefield. Shila and Robin are ejected from the LARP match by the officials on a technicality where they actually caused significant harm to an oppenent.

6:12 – Arguements commence… team Assilsa is pissed about the call

6:17 – McChill is woken by all of the commotion

6:23 – After splashing a little mana juice on his face, cahol enters the fray. Spitting out explicatives at the officials.

6:29 – McChill gets ejected from the match for intimidating the officials and threatening physical and magical violence.

6:37 – McChill walks off the battlefield, calling all teamates to follow

6:45 – Officials call the match in Sundassa’s favor, after the Assilsa seemingly forfeit

With 15 minutes left in the 8 hour epic matchup, Sundassa is pronounced winner of PAO LARP Day 2010

Pictures from the day: