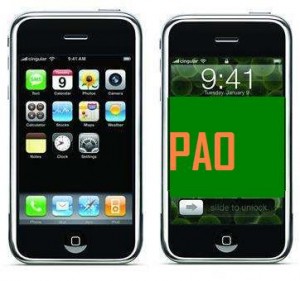 Apple’s 3g iphone (tresG for our Spanish speaking audience) has made its way into my hand this past weekend. The 3g has replaced my original iPhone, which was unable to stay in one piece during its short life (8months). The iPhone gets most its use for internet pornography (see:LubeTube) and checking stocks, mostly.

In my time with the 3g I have been somewhat satisfied. Lets run through some of the PROs:

1. it is black – black makes it looks cool and hip and can help get you into hard to get into clubs
2. its 3g – this phone actually rings when people call and makes phone calls when you make a call, unlike the original, which had connectivity issues
3. MazeFinger compatible – Mazefinger the app still works on the 3g.
4. Its louder – The phones speaker is noticably louder, which enhances some existing apps, like atomicFart
5. GPS is solid – I can now locate myself better, instead of a big circle surrounding the state i am in, the gps equipped iphone 3g can now pinpoint where im at. (note: it doesnt track how you got to said destination)

CONTINUE READING the CONS and FINAL WORD and FINAL RATING

1. Its plastic – the original phone was sweet and metal and was heavy as shit. It felt cool in the palm of my hand. The 3g is made of plastic and other materials, mostly plastic. Plastic can burn or/and melt during extended imob gaming sessions. Plastic feels slightly dainty in the palm
2. its not metal – as stated above, its no longer metal.
3. doesn’t drop/miss calls – one benefit/nonbenefit of the original was the lack of service quality. Always easy to blame the iphone for screening calls
4. iMob data gone – I had to restart my iMob account on the 3g – NONTRANSFERABLE
5. It costs less – It costs 200$+ less than the original which makes it not nearly as cool and expensive. I don’t feel like 2 million dollars carrying it around anymore and its not expensive enough brag about all the time

Final Word: The iPhone 3g is a combination of good and bad and a mix of ok. I am receiving a lot more phone calls and have been dropping less calls… its more of a nuisance. The gps and the sound upgrade on the existing apps (atomicfart) definitely carry this iPhone upgrade. If you own an original iPhone, Keep it, youll get more out of the look and style of that phone than with the new updates in the 3g iPhone

8 Fist Pumps out of a possible 10! Solid Buy (if you dont have the better metal original iPhone)