Internationally known Catholic priest, Rev. Alberto Cutie, Father Oprah, who was caught on photograph last week embracing and fondling a two-piece bathing-suit-clad woman on a Florida beach has admitted they had a two-year affair.

Pineappleope.com reporters watched the CBS’ “Early Show” on Monday and reported back to Pineappleope.com that he is in love with the woman and is considering his options:

1) Break up with her and repent

2) Leave the priesthood and marry her and repent 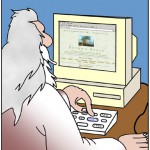 The first photos of the Cuban American priest, also known as “Padre Alberto,” appeared on the cover of last week’s TV Notas magazine and on eight inside pages and the centerfold spread and on the magazines pull out poster. The cover says in Spanish: “Good God! Padre Alberto. First photos of a priest ‘in flagrante’ with his lover.”

Pineappleope.com found out that Father Cutie had in fact made a promise of celibacy… to which all priests are expected to fulfill that promise with the help of God.

Since the scandal broke, Rev. Alberto Cutie has lost all employment and probably worst of all lost the Rev. on his name and is now just Alberto Cutie

One Reply to “[Religion][Affair] Catholic Priest Gets Laid, multiple times”