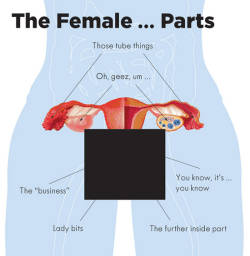 This marks the first time in more than 20 years that a Nobel Prize has been given to a physician who specializes in all that stuff downstairs. Committee members praised Lazoff for helping to stem the frightening epidemic, which last year killed more women than ta-ta and derriere cancer combined.

In many cases, Lazoff’s methods have been able to prevent the spread of malignant cells from the inside of the um, geez, to the…more inside of…you know, the part that’s sort of, uh….God, is it getting hot in here?

During the remarkably noninvasive procedure, targeted blasts of radiation are delivered to the, err, naughty region through a special, well, wand-like device that is—ahem—inserted near the, ho boy, “affected area.”

You get the picture.