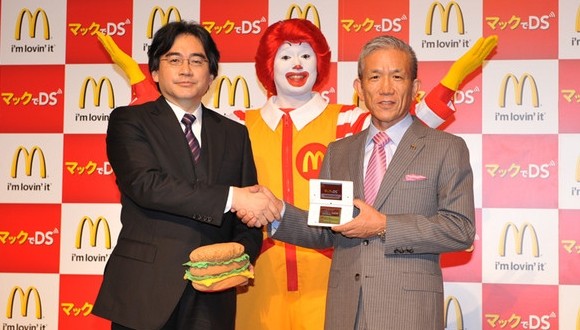 Last year, Nintendo and McDonald’s introduced the “Nintendo Spot” service, through which special downloadable content and Nintendo Wi-Fi Connection access was made available at a few Tokyo-area McDonalds locations. This week, Nintendo and McDonalds announced that they will offer the service nationwide, with new exclusive content. Train stations on Tokyo’s Tsukuba Express line will also have the service, with different exclusive content.

The Mac de DS service allows users to access DSiWare, to play online using the Nintendo Wi-Fi Connection, and to download special demos and other content. Current material includes a Pokemon stamp rally in which you unlock coupons for McDonalds products by visiting stores and “collecting” Pokemon. There are also quiz games and downloadable comics.

We’d say this kind of commercial cross-promotion is despicable, but, really, this has to be designed more with Nintendo’s context-sensitive DS download initiative than with marketing — because neither Mickey D’s nor Nintendo really needs to do anything to become more popular.

via McDonalds/Nintendo partnership goes nationwide in Japan with new services.