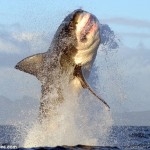 Someone asked me once, “if it rains fish, are we all going to die?” – a very valid question. The answer – “maybe”. It really depends what kind of fish.. but the cause of the fish rain will not kill you. Blow fish or sea urchins WILL kill you. No doubt.

If it rains sharks, however – they will eat you from above, so its not even killing, its like god smiting you.  Think of the sharks as lightening – its just your time, buddy.

So.. WHY does it rain sharks and other shit? Asshole tornadoes are the cause – here’s how it happens.

One Reply to “[How Things Happen] When it rains fish, what the hell is happening?”