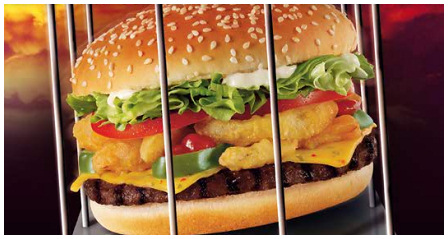 Today, Thursday, I had the opportunity to eat Angry Whopper. Angry Whopper was eaten for lunch. Did it satisfy? Did it taste delicious? Did Angry Whopper end my hunger? You will find out in the following review. REVIEW TIME.

This burga was not spicy enough. The tomatoes were green. The onion rings were very soggy. The Angry Sauce wasn’t outstanding. The spicy jack cheese was not spicy. I got a coke with it. That was ok. The fries were decent, came in a trendy frypod (no relation to the iCase).

Angry Whopper did not deliver. The regular whopper, burger kings signature dish, is slightly less spicy than Angry Whopper, and proves to be a better choice and you will save yourself a dolla.

Bottom Line, Angry Whopper is not a top offering from BK, and you should spend your food dollars on a different food choice.

On the Pineappleope.com scale, Angry Whopper gets a 2 and a half fist pumps out of a possible 10 – Extremely Difficult to Recommend.