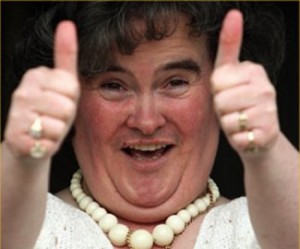 Reports are flowing in that Susan Boyle flipped out at a screening of ‘Britain’s Got Talent’ on Tuesday where witnesses say the unsightly sensation grew angry when her favorite judge praised her 12 year old competition.

The 48-year-old shemale singer cursed as she stormed out of an event held at a London hotel bar when judge Piers Morgan told rival Shaheen Jafargholi, 12, that he had given “pound for pound, the best singing performance we have heard in the semi-finals so far.”

Upon hearing that bit of acclaim, Susan gave the TV screen a two-fingered salute, cried “FU-k off!” and stomped back to her room for the rest of the night. “Everyone was stunned by her reaction,” said one onlooker.

Boyle has admitted to having a crush on Piers, even calling him “Piersy baby” on Sunday’s semi-final.

The judges on the hit show think Shaheen has a shot at beating Boyle, Pineappleope.com thinks neither will win.