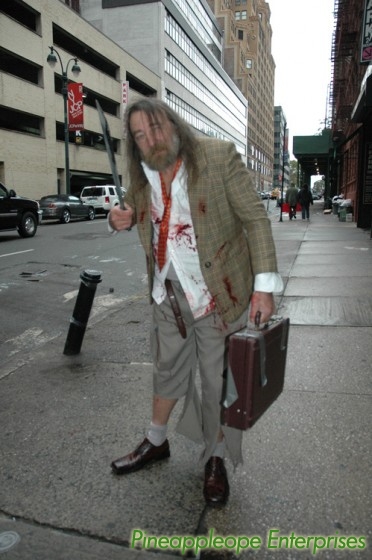 April 8 (PAO Central) — A California she-man, going by the name “Antoine” was arrested today on charges he threatened Apple chief Steve Jobs with a 16″ machete. Antoine has a previous conviction for harassment, prosecutors said at a federal court hearing today in San Francisco.

Antoine LeeAnne Galaganukis, 48, of San Francisco, was ordered by U.S. Magistrate Judge Bernie Zimmermong to remain in custody. He was charged with making obscene, harassing or threatening phone calls to Jobs all day today, Zimmermong said, citing something about the OS4.0 press conference, further adding “it was a total let down, and that Jobs dude is trying to bend us all over with this iAds BS”.

Assistant U.S. Attorney Cynthia Frey said in court that Galaganukis was convicted of making perverted phone calls in 1991 and had numerous convictions for stalking while swinging a machete. Galaganukis said in an interview that he may be suffering from bipolar disorder caused by iPhone overuse and hasn’t had access to a treatment app, authorities said.

“He is believed to be a pervert, a danger, and generally odd smelling, at least to a specific person” cited in the complaint, an usher at the event said in requesting that Galaganukis remain in custody.”

Stay tuned to PAO for more information on this developing story.