Brought to you by JockJoose.com

A police officer used a Taser gun to apprehend a 17-year-old fan who ran onto the field during a Phillies game Monday night, and the team and the police are investigating whether it was an appropriate use of force.

The fan, wearing a baseball cap, red T-shirt and khaki shorts, hopped a fence and scurried around the outfield, eluding two security officers in the bottom of the eighth inning against the St. Louis Cardinals. One officer used a Taser and the fan went down in a heap. Several Phillies placed gloves over their faces and appeared to be stifling laughter at the wild scene. 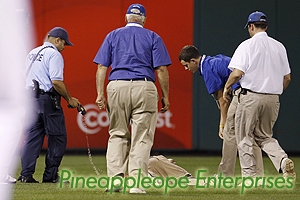 Phillies spokeswomen Bonnie Clark said the police department is investigating the matter and discussing with the team whether using the stun gun was appropriate.

Brought to you by JockJoose.com – The Premier Sports Network on the Internet