Today we bid goodbye to one of our oldest contributors in the Stereo Technology department, Herman Whitecastle. Herman is leaving us today for greener pastures. We think. Actually, while we know he checked in to Lab 357 using his corporate key card last November, access records show that he never checked out, and noone has seen or heard from him since. Until we find you Herman, we bid you good luck and a fond farewell, wherever you may be. 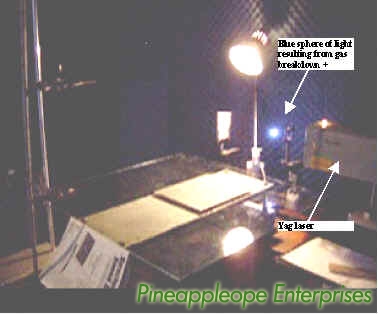 UPDATE: Police still have no leads as to the whereabouts of Mr. Whitecastle, known to his LARP buddies as B.A. Barracuda. All LDAP entries were deleted, which has lead investigators to suspect foul play. In an effort to drum up some leads, investigators have asked us to share the following evidence with our readers. The picture above is the security camera from Lab 357. Suspiciously, Herman is not seen in this photo. The other piece is a note left in Mr. Whitecastle’s office, with no known fingerprints on it. The text of the note reads:

“Through a cooperative research effort between enthusiastic physicists such as myself and skilled choir directors, we may be able to take the top 10 percent of the best singers in our population and teach them such perfect harmony that we can create a gigantic biohumanoid coherent acoustic laser! [My emphasis, his exclamation point.] If they can sing low enough, about thirteen octaves below middle ‘C,’ we can use the wave guide effect of the captured atmosphere, and I think we could get over 60 thousand miles out of them. Think of the weapons possibilities.”